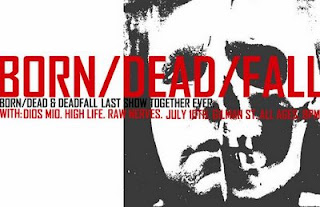 BORN/DEAD and DEADFALL started around the same time, played countless shows together as they were starting out. Born/dead are heading off to Europe-with Will staying in Europe after the tour, so it seemed fitting they would play one last All ages show together at 924 GIlman Street . July 10th, 2009.

MORPHEME 7" IN THE WORKS!

We've blogged a lot about our fanaticism for New-ish bay area band MORPHEME, and We're excited to announce they are recording a 7" EP over at EARHAMMER to be released this summer on Prank.

Their Singer Moto has to return to Japan soon, but they will play in Portland on June 27th at Satyricon with Poison Idea,Hellshock, lebanon ( a new portland band with Brad from From Ashes Rise and early Wb2D), Ripper and more at the second day of Brian Hopper's birthday bash!!! 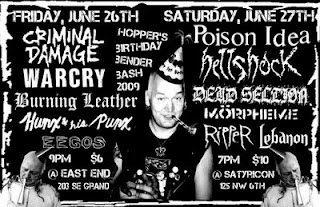 Posted by PRANKREC at 3:47 PM No comments:

IRON LUNG AT SUPERSONIC FESTIVAL IN THE UK! 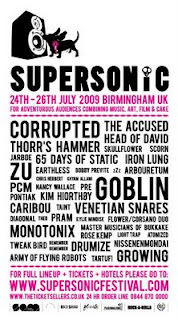 IRON LUNG are playing the SUPERSONIC FESTIVAL in JULY in the UK.

IRON LUNG are hard at work writing for their Collaborative LP with David Bailey that will be recorded in August and released on Prank in either late fall 2009 or early 2010.
Posted by PRANKREC at 3:24 PM No comments:

KYLESA- ON TOUR IN EUROPE!!! 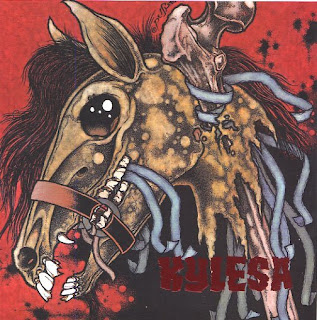 KYLESA are back on tour in support of their newest LP "Static Tensions" on Prosthetic. They are playing some crazy shows!! They will have Copies of both their Self Titled First LP/CD on Prank and Purple Vinyl copies the "110 Degree Heat Index" 7" on Prank. The Current Press of the Lp is the last one with this version of the cover as it's been printed- it will be slightly corrected on the next and subsequent pressings. 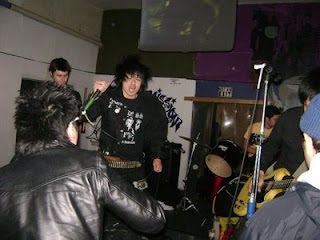 MORPHEME are playing a last minute show this wednesday with Virginia's AGHAST and Robert From Artimus Pyle and Will From Born/Dead's new combo SUICIDE BOMB - at your favorite can-not-be-named on the internet art gallery venue in San Francisco with cheap mojitos in the mission. This Wednesday!!!
Posted by PRANKREC at 8:44 AM No comments:

Prank Will be at the KDVS record swap in Sacramento this Saturday from 9 am to 2 PM At Luigi's Fungarden in Midtown sacramento-1050 20th St
Sacramento, CA 95811. We'll have an assortment of Prank Titles as well as stuff from Havoc, Feral ward and other labels, as well as used Punk records and records of all Genres.
More Info on the swap Can be found here and here.
Posted by PRANKREC at 8:37 AM No comments:

Bury The Living are playing a ( delayed) 10th Anniversary show in Memphis on June 24th at the Hi-tone! Jack is the barfield hooked them up with a sweet poster design for the Show. BTL are busy writing and recording a new Album, which will be released on Memphis'  SOUL IS CHEAP label- who released the band's first classic album.
Pat and Chris From BTL are also in an Upcoming Horror movie that will be out on DVD In  September - Check out the trailer here.
Posted by PRANKREC at 8:25 AM No comments:

Ebullition has the three new Prank 7"'s in this weekend's Wholesale update. There are only 400 Judgement singles at Ebullition, so be sure to grab some quick for your store or Distro..or check your favorite store or distro at the end of the week if you still need a personal copy. Prank is still COMPLETELY SOLD OUT of Judgement....though We still have White Vinyl CROW and ACEPHALIX available for mailorder. There is also a White vinyl re-press of DEATHREAT 7" available at Ebullition.
NO IDEA and REVOLVER both have the ACEPHALIX and CROW, as well as the re-press of KYLESA "110 Degree Heat Index" 7".
Posted by PRANKREC at 4:43 PM No comments:

THREE BRAND NEW SINGLES OUT THIS WEEK FROM PRANK!!!
Apologies about the higher prices, by the time delivery confirmation, pay pal fees and the new higher USPS rates are figured in, the singles are now hitting the $6 and Up range. Both ACEPHALIX and JUDGEMENT have specialty printing and were expensive to make, and the JUDGEMENT will likely not be re-pressed, so has to recoup it's cost from a very limited pressing. HG FACT will release the Judgement Ep in July in Japan. 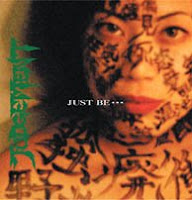 JUDGEMENT “JUST BE” 7” EP ( Prank 103 / HG-253)
*** COMPLETELY SOLD OUT, THANKS FOLKS***
JUDGEMENT “JUST BE” was originally released as a CD- Only EP by Tokyo’s HG FACT label in 2001. This was the debut release of the Tokyo bands final line up Comprised of Japanese legends Guitarist ZIGYAKU ( GUDON, HALF YEARS, BASTARD), Drummer MUKAI ( CHICKEN BOWELS, DEATHSIDE) and then-new members singer JHA JHA ( LIPCREAM) and bassist SAKURA. Combining the best elements of the band’s previous works with an upbeat spirit, high energy drumming and incredible guitar riffs, “JUST BE” ‘s is another landmark in the band’s impressive catalog of now classic 7” ep’s dating back to the band’s origins in the mid 1990’s. This is the first time these four tracks appear on vinyl. Split release with HG FACT released for JUDGEMENT’s recent US performance at Austin’s CHAOS IN TEJAS Festival. NO SALES TO JAPAN. 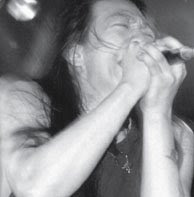 Tokyo Legends CROW return with two new blasting tracks of Doomy Metallic Punk Mayhem – “FLOCK OF BEAST” and “FLOCK OF BEAST 2”. Thundering deeper into epic, mid tempo metallic territory on the A-side with CROW’s trademark gravel-drawn vocals over searing riffs, this EP echoes their recent “THE BEATING OF THE WINGS OF DESTRUCTION” 12” by exploding on the B-side into ferocious, fast paced hardcore. CROW origins date back to the early Japanese punk scene of the 1980’s, but they have attacked in the last decade with a renewed intensity, culminating this decade in two US tours and a second Album “Bloody Tear” which was released in the U.S. by Prank in 2007. This most recent recording testifies they have no intention of letting up that ferocious Intensity!!! 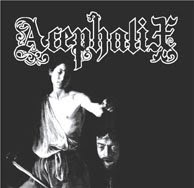 A brutal combination of Low end Metallic Distortion, Pummeling riffs and Gnarled vocals, San Francisco's ACEPHALIX's Debut 4 song 7" takes influence from all over the map of Extreme music-from CELTIC FROST to CRO-MAGS and INTEGRITY, from WOLFPACK and Later ANTI-CIMEX to SACRILEDGE and AXEGRINDER, but has hammered out and forged it's own sound by relentless gigs around the SF Bay Area over the past year. Featuring current and former members of THE RIFFS, DEPRESSOR, POISON IDEA, DEFIANCE, DEATHCHARGE and BLOWN TO BITS, this is the heaviest thing prank has released in almost fifty releases, a modern attack yet reminiscent of early classic prank releases by DAMAD, ELDOPA 1332 and the bleak punk metal fusions of the late 90's and early 00's. First printing in a foil stamped sleeve.

Posted by PRANKREC at 7:10 PM No comments: