GRIMPLE " Get Me Out of my Van I have No Key, Phil"

Prank has a brand new two color offset cover printed at Econopress of it's repress of the debut GRIMPLE 7" "Get Me Out of the Van I have no Key Phil"  . These are limited to 80  numbered copies for sale and come in two different colors of vinyl, and also are packaged with two original Grimple stickers from the late 1990's. This Ep was originally released in 1992 on Owen Peery's label, Homemade Records. You can buy one HERE 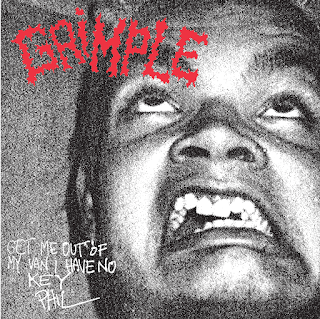 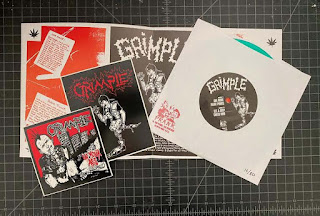 Despite Issuing the record and having met Phil Brito, the story behind the single always escaped me so I asked Pat from Grimple about it. Who was Phil? Why was he stuck in the van?

“Phil” Phil Brito is from New Mexico. He moved to the Bay Area in the very late 80’s/early 90’s. He then became the guitar player for a band called Paxton Quiggly. Phil’s older brother Johnny Brito had moved to the Bay Area prior to Phil. Johnny Brito was in a band called 23 more minutes that formed in Santa Fe New Mexico and eventually toured and set their roots in the Bay Area. Johnny designed the circular Grimple image and the Grimple logo on the cover of the GUYA LP, as well as booking GRIMPLE’s first US tour. He was and remains a dear friend to Grimple.

Before Phil moved to the Bay Area, he was an immense contributor to the punk, metal and hardcore scene in New Mexico. Mostly in and around Santa Fe. He booked volumes of shows and brought touring bands from all over the country to our small local scene. Here are a few that come to mind...Corrupted morals, Dissent, Neurosis, Political Asylum, Dead Silence, Blister, Plaid Retina, NOFX, Anti Schism and the list literally goes on and on"

Pat asked Phil if he could write an explanation of what led up to us eventually using his note and face on our record cover. This is what he provided. 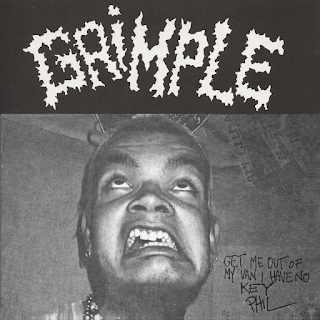 Get me out of my van,

I have no key.

I had never expected to be on the cover of a Grimple record and the title to be a note I wrote alerting my mates to rescue me from my van. But that's how it turned out and it's a honor to have my mug plastered on a EP by the legendary Grimple! So here's the story behind it. I was living at California street house (later to become Grimple house) and came back home that evening only to find I had not taken my house key with me and had no way to let myself in. Well no one was home and I frankly didn't know when anyone would show up, so I thought to myself let me leave a note on the front door. Cool, paper and pen now the note, "Get me out of my van I have no key. Phil". So there I was all set, might as well get some sleep in my van until someone comes home sees my note and lets me in the house. I thought to myself, "well done and well thought out". Don't know how much time passed however Pat eventually came to my rescue laughing hysterically at me... I said what the hell is so funny and well he can give his take on how he interpreted my unfortunate/fortunate situation.

I have even been told, "Are you the guy on the Grimple cover"? Well yes I am...

So there you have it direct from Phil.

" Anyway, as I recall I came home that night from doing that thing that punks do, and apparently not thinking perfectly straight. I saw this note stuck on the front door of the house. I read it “ get me out of my van I have no key, Phil”

I thought about it for a second, looking at Phils van. I thought to myself “ I know Phil parties but how the hell did he manage to lock himself in his own van. Can’t he just grab the door handle and let himself out?”

So I approached the van and opened the door laughing, thinking my friend Phil is not all there. I questioned him about it and he explained it was his house key he did not have. I told him what I thought and we both had a good laugh at my altered punk theory on what the situation was.  I saved the note. Shortly there after we recorded this 7”.

4 songs on a record, a xerox machine, whatever was in Ira’s pockets at the time and a glue stick later... This record was released.

On behalf of our entire band, Thank you to Phil and everyone involved in making this record happen. And a huge thank you to Prank Records and each and every person that has listened and supported our music over the years. Sincerely, we are eternally grateful.  -Pat Vigil"

GRIMPLE “ UP YOUR ASS” AND “A DARKER SHADE OF GREY”. will be reissued in early 2021 by Prank records.