At the end of  The Grimple / Logical Nonsense split “ A Darker Shade of  Grey” There’s a spoken word piece by Wendy-O-Matik with sound collage by Noah Landis. Wendy-O-Matik was well known for her spoken word performances at Gilman Street and punk shows throughout the Bay Area, and also the vocalist of Gag Order,  a Bay Area band with Raina from the original line up of Grimple, Noah and Keith from 23 More Minutes. We Asked her about her spoken word and how she was invited to appear on the record. 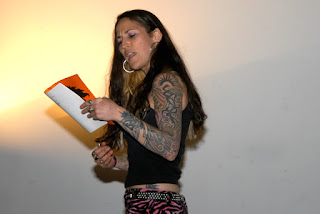 Wendy-O-Matik: In the late-80s, while I was listening to my local radio station KPFA 94.1, Lydia Lunch’s spoken word was played. I was mesmerized and captivated by her words, rage, and passion. I hadn’t really heard much spoken word by women up to that point, and it was mostly by men. Lydia’s spoken word ignited and inspired me to find my own voice and to take my writing more seriously, and that’s how I initially found my courage to do spoken word. I found open mic nights where they had spoken word sign-up lists and I started showing up. I also had strong support and encouragement from my partner and my friends, as well as other bands in the punk scene to keep doing spoken word. Gilman Street was also a long-time supporter of my spoken word, inviting me to read between bands.

Prank: The piece you have on the Split LP is a great part of the album, underlining the meaning of the entire record, do you remember how you ended up doing the recording for the record?

Wendy-O-Matik: Ugh, my mind is a sieve at this age! The finite details of the recordings that I did have sadly faded from my memory. I had the privilege of doing all of my recordings with an ultra-skilled, brilliantly creative, and well respected sound engineer, Noah Landis, so that was a true gift. The members of Grimple and Logical Nonsense were good friends of mine, so we connected frequently through shows, parties, and friendship. I rarely missed a Logical or Grimple show at Gilman. I even saw them play in Santa Fe. All I can say is that I was so honored and privilege to be invited to contribute to their album. That split is still epic and timeless. 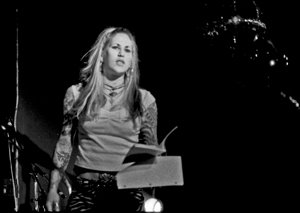 Prank: You mentioned before that the time when this record was originally recorded was a really inspiring time of activism, community and music for you. The 90's bay area punk scene and it's extensions of family from all over the US and beyond was pretty special time and place, what inspiration do you carry from it?

Wendy-O-Matik: Great question! The bay area punk scene in the early 90s was definitely a strong, well-connected and active community. For many of us, it was more than just shows and parties. We gathered and organized for political demonstrations against war, inequality, reproductive rights, the climate crisis, and more. We gathered, organized and spoke out against skinheads, violence against women, and we even held fundraising shows to help out friends with medical health issues that might have left them homeless or financially destitute, as well as for nonprofit organizations that represented the issues that we cared about. To this day, I am still driven to play an active role in local activism circles in the fight for social justice and radical change. 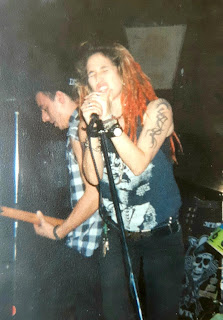 Prank: What have you been up to ?